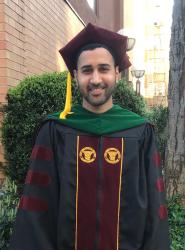 Hi there, my name is Jayaji. I was awarded the UCB Family Epilepsy Scholarship in 2016. The scholarship helped fund my first-year expenses at New York Medical College, where I recently graduated with a medical degree. Currently, I am a neurology resident at the University of Washington.

My connection to epilepsy stems from my diagnosis of juvenile myoclonic epilepsy (JME). I received this diagnosis during my junior year at Stanford University, after I experienced a tonic clonic seizure during one of my classes. I understand now that for several years before my diagnosis, I had experienced a buildup of classic but less noticeable symptoms of JME. Due to a combination of confusion, embarrassment, and fear, however, I had overlooked what I was experiencing. I had felt reluctant to admit something could be wrong. As a result, my condition went undiagnosed until college. Thankfully, with medication, my symptoms ended. During this time, I leaned heavily on my doctors. They empowered me with information about JME, treated me with respect and without judgement, and made me feel less alone. Through these interactions, I realized how deeply doctors impact patients not only physically but also on emotional levels. Due in large part to my experience, I began to consider medicine, and neurology in particular, as a future career.

When I learned that I had epilepsy, I did not know any others affected by the condition, which contributed greatly to my feelings of isolation. Therefore, after my diagnosis, I began volunteering with my local chapter of the Epilepsy Foundation. Over the past several years, I have served as a counselor at annual youth summer camps organized by the Epilepsy Foundation of Colorado. I have also taken part in epilepsy awareness events and delivered seizure first-aid trainings on behalf of the Epilepsy Foundation of Northern California. As a camp counselor, I aim to encourage open dialogue about epilepsy and to empower young people to follow their passions in spite of their challenges. Through awareness events, I use my position as someone living well with epilepsy to discuss the science of the disorder as well as common misconceptions. For example, I stressed that not all seizures look the same. My experiences have helped me realize how important finding community can be for those affected by epilepsy. I now strongly encourage patients and caretakers to seek out opportunities to connect with others in the epilepsy community. Support groups and camps for young people are wonderful ways to do so.

Looking to the future, I am excited to continue my residency training in neurology. In my career, I aspire to be an advocate for vulnerable patient populations and to pursue research to improve the experiences of patients interacting with the healthcare system. I also would like to encourage the open sharing of experiences by those with visible and invisible disabilities, thereby reducing stigma, and advance social causes that promote inclusion. I am appreciative of the UCB Family Epilepsy Scholarship for supporting my goals and giving me this platform to share my story.