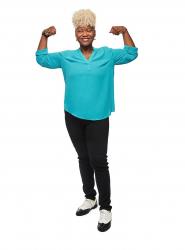 Hi, my name is LaKeisha, and I’m a 43-year-old, single mom of 6 children (2 angel babies) who was diagnosed with epilepsy in my early 20’s after initially being misdiagnosed. My official diagnosis of epilepsy came after having a motor vehicle accident in 2004. The seizure that caused the MVA left me with numerous broken bones and future surgeries, jobless, and ultimately homeless. Needless to say, the road to recovery would be long but little did I know that it would be worth it!

Having epilepsy was challenging not just from the physical aspects of the constant seizures but also from a mental and financial standpoint. I had lost myself worth and confidence in who I was as a woman and my sense of purpose as a person. I lost friends, family support, and the long-term employment that I enjoyed. But what bothered me the most was the dream of earning a college degree that somehow now seemed unachievable and a dream that I would have to learn to leave unfinished because the constant memory loss and lack of funds made it seem unattainable. It was during my reflective moments during this time that I thought about who I use to be vs. what I could now be despite having this diagnosis. Which led me to having a conversation with my daughter some years later about pursuing the degree I had put on hold for years. It was then she who championed for me to push myself to not prove who I was despite epilepsy but to improve who I was to myself and that is exactly what I did.

I chose to apply to the UCB scholarship due to the financial constraints and wanting to pursue my dream of getting my degree. In the past, I had the opportunity to finish in a different career field but was unable to complete my schooling due to being diagnosed with epilepsy. Despite that, I always wanted to show others who had epilepsy that anything is possible as long as you put in the time and the work. But most importantly, I wanted to prove to myself that I could finish a goal I started when I was younger despite being a teen mom and adoptee. I also wanted to not just tell my oldest daughter to go to college but show her with my own actions that you can achieve your goals at any age, even when it seems like you can't see the finish line.

I was elated when I won the scholarship. It showed me that I was on the right track to achieving my goals. Everything was lining up for me to see that this was the journey I was supposed to be on, not just for me but for anyone who had faced life’s challenges. After being awarded the scholarship I finished college, earning not just my associate's degree but also my bachelor's degree which I used to help me start my own life coaching practice where I instilled the same hope and tenacity in my clients.

Since being awarded the scholarship, I have continued my passion and purpose of being a Life Coach, Professional Speaker, Author, and Epilepsy Advocate, sharing my story around the world. Most recently, I have had the privilege of being a Peer Support Specialist for our military veterans who have been diagnosed with epilepsy. I also got the privilege of seeing my oldest walk across the stage to receive her college degree. A dream I once thought wouldn’t be possible because of epilepsy.

Recently, I decided to attend Harvard Business School, and successfully obtained my certification. This had been a personal goal of mine as I wanted to learn more about business and entrepreneurship, so I could operate a bigger business of my own one day and show others with my condition that they could too, if they didn’t lose sight of who they are beyond the diagnosis.

Going forward I hope to continue doing advocacy work in spreading awareness about epilepsy and contributing my efforts to the community to help people discover their purpose. I want to inspire others who have epilepsy or any chronic illness that anything is possible as long as they’re willing to put in the work to get where they want to be. My personal wish in life now is to live out loud as a success story to others that sometimes the load doesn’t get lighter, you just become stronger. I'll continue to use my accomplishments to create a significant impact within my community and hopefully the world.