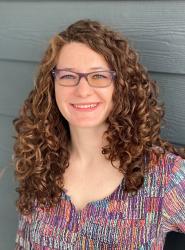 I was diagnosed with epilepsy when I was 9 years old. During this time, I was a competitive gymnast. Due to the nature of my seizures being nocturnal, I was able to continue doing the sport that I loved. As I got older, my seizures changed, and they started to occur when I was awake; however, I had a very acute aura, which allowed me to continue doing the sport that I loved. In high school, I made the transition from gymnastics to springboard diving, and I was good enough to be able to be a division 1 NCAA diver; however, I was not good enough to earn a scholarship, meaning that I was training 20 hours a week and was a full-time student, making it impossible to work through college.

When I applied to the UCB epilepsy family scholarship, I was slowly starting to get involved in the epilepsy community. The day I learned that I had received the scholarship was the day after I returned from being a counselor at a camp for kids living with epilepsy. In that moment, I wanted to be sure that I shared my story with anyone willing to listen.

After learning that I was not a candidate for brain surgery, I decided to pursue vagus nerve stimulation (VNS) therapy. My doctor and I decided that I should wait until I finished my collegiate diving career. At the first meet of my senior year, my seizures became so severe that I was unable to continue diving, so I made the decision to go ahead with getting the VNS. After taking off a term of school, I managed to graduate on time, get back to diving, and start my master's degree. The next year I was able to complete my final season of diving, at an all time best, while pursuing my MS in healthcare management.

After my diving comeback, I was blessed with the opportunity to share my story with others. The University of Denver chose to do a two-part video about my journey with epilepsy and my comeback to diving that they showed live during hockey and basketball, and that aired during the commercials of those games. During the next few years, I became more vocal about my epilepsy. I was blessed by being the keynote speaker for the Epilepsy Foundation of Colorado’s gala. I also became a patient ambassador for VNS therapy. Currently I am 4 ½ years seizure free.

Over the next few years, I learned that it was no longer time for me to grow from sharing my story, but rather it was time for me to truly help others living with epilepsy. After setting lofty goals, I got my dream job working as the Care Navigation Manager at the Epilepsy Foundation of Colorado and Wyoming where I spend every day helping those who are affected by epilepsy get access to resources. I have seen people grow with their acceptance of their condition and learn how to navigate living with epilepsy.